When We Were Hidden: Ten Years of the Gay/Lesbian Support Group at Rice University 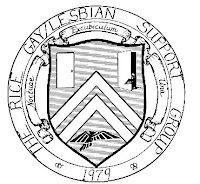 In January of 1979 the "Gay/Lesbian Support Group" formed at Rice University in Houston. The organization was the prestigious school's first officially recognized LGBT student group. The group, with the Latin motto Noctuae Excubiculum Una (roughly: one owl out of the closet (the Rice mascot is the owl), did not appear in the University's yearbook, the Campanile until 1983.

That year the twenty member group appeared photographed in front of a statue of the University's founder,William Marsh Rice. All but two of the group hid their faces beneath paper bags to insure that their identity would remain secret.

For the next ten years LGBT students at Rice would continue to hide their identities in the Campanile.

It took fourteen years for members of Rice's student LGBT organization to feel comfortable having their pictures and names in the yearbook. 1993 was not that long ago, just under twenty years.

I look at that picture from 1983 and I am haunted by a past where such anonymity was necessary, but I also fear a future where it might again be needed.

Last year Rep. Wayne Christian twice attempted to remove resources for queer students from state universities. (Rice, being a private school, would not have been affected.) Although his efforts were defeated the threat remains. Paper bags are for groceries, not for faces. People like Wayne Christian who want to return to the days where students were afraid to be outed in the yearbook - people who want the lives and contributions and families of LGBT people to be hidden under a sack - must be stopped.

The only way to stop them is to be public, to put aside the paper bags and paper plates and to call the people who get to make decisions about things like campus LGBT resource centers: the members of the state legislature. Christian has an opponent in his Republican primary, but if he's re-elected there's a pretty good chance he will try again. Now is the time to tell your representative to support campus LGBT resource centers at Texas schools.

If you don't know who represents you visit this site to find out.

LQ would love to hear from any of the anonymous students in the photos! Please leave your comments below or e-mail Daniel@LegislativeQueery.com.
Posted by Daniel Williams at Friday, March 23, 2012