Elaine Palmer is a Democrat running for judge in the 215 Civil District Court in Houston. Her opponent is incumbent Judge Steven Kirkland, the first out LGBT judge elected in Texas.

Palmer is very proud of her broad community support. So proud that she has sent out an email with snap shots of her supporters. At the bottom of the e-mail is a picture of the "Nguyens," proud supporters of Palmer. 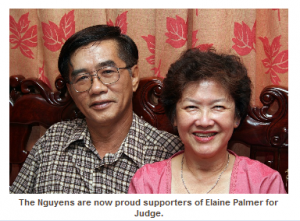 Cute couple right? Tan Wei Ming, the Malaysian photographer who took the shot, thought so, too. That's why he uploaded it to the stock photo site 123rf.com. 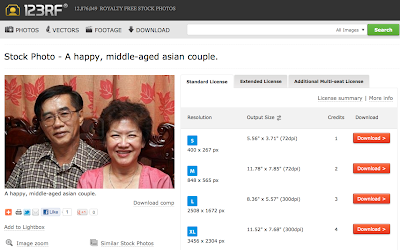 Just think, for a small, one-time fee, any candidate could have the endorsement of "a happy, middle-aged Asian couple" and enjoy the same broad, grassroots support Elaine Palmer claims to have. Isn't that convenient? At the very least it would seem to be easier than garnering actual grassroots support.

A representative from Palmer's campaign couldn't immediately be reached for comment.
Posted by Daniel Williams at Thursday, March 15, 2012