Today is the 123rd day of the 82nd regular session of the Texas Legislature. Both the House and Senate started back up at 10 this morning.

As I mentioned this morning in my column on the Dallas Voices' Instant Tea Blog, the fur flew last night on the House floor as the midnight deadline for House bills to be heard on second reading approached. HB 1386, Garnet Coleman's teen suicide prevention bill, had been on the House's to-do list since Wednesday, but started the morning 138 bills back on the list.

From the Dallas Voice Column:

"An earlier draft of the bill named it “Asher’s Law” after Asher Brown, the 13-year-old Houston-area boy who committed suicide after enduring years of horrific bullying in school. The House Public Health Committee objected to naming the bill after Asher and also removed any mention of LGBT youth. Despite these revisions HB 1386 still contains many commonsense guidelines for schools and other agencies to provide counseling and resources designed to abate bullying and prevent suicide."

Mid-afternoon HB 32 by Brandon Creighton (R - Conroe) came up for a vote. The bill was designed to prevent the implementation of federal health care reform in Texas. Coleman called a "point of order" on the bill. A "point of order" is an argument by a member that the bill was not advanced along the legislative process in accordance with the rules. In the case of HB 32, Coleman pointed out that the committee report on the bill did not correctly reflect the testimony given by Dr. Steven Hotze of Houston. The point of order was sustained (meaning that Coleman was right and the committee report was wrong) and the bill was killed. 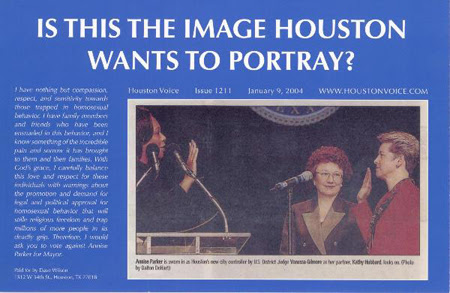 (Hotze, you may recall, bankrolled the gay-baiting "Is this the image Houston wants to portray?" mailer piece attacking Houston Mayor Annise Parker for being sworn in with her partner of many years at her side (left) and is president of the Conservative Republicans of Texas.)

Coleman's killing of HB 32 would later have repercussions for HB 1386, his teen suicide prevention bill.

"Government may not, directly, indirectly, or incidentally, substantially burden an individual's or a religious organization's conduct that is based on a sincerely held religious belief, unless the government is: (1) acting to further a compelling governmental interest; and (2) using the least restrictive available means to do so."

Amazingly, not one member asked why the resolution's author felt this change was needed and Phillips did not see fit to explain his reasons for filing the resolution. Charlie Geren (R-River Oaks) spoke against the resolution arguing that, for instance, Westboro Baptist Church's protests of military funerals, which the House had tried to curtail by passing HB 718 just last week, are motivated by a sincerely held religious belief and that passing HJR 135 could open the state to lawsuits from WBC.

During the back and forth between members about WBC not one person mentioned WHY they protest at military funerals, or that their sincerely held belief was that God is killing U.S. soldiers as punishment for "tolerance of homosexuality." In fact, the 150 members of the Texas House managed to have a conversation about the church famous for it's "God Hates Fags" slogan without ever mentioning the words "gay," "homosexual" or "queer." HJR 135 passed 79 to 45. HJR's proposing constitutional amendments must pass the House twice. The first vote only requires a majority vote, but the second, which should be today, requires yeas from 100 members.

By 10 pm HB 1386 had finally worked it's way to the front of the line. Coleman stepped up to the mic to explain his bill when Creighton interrupted and offered a point of order of his own in an attempt to punish Coleman for killing HB 32. Consideration of HB 1386 was delayed half an hour while the House's parliamentarian determined if Creighton's objection was valid.

From my Dallas Voice Column:

"Half an hour later the bill did not come back up for consideration, nor had it an hour later. With the midnight deadline only 40 minutes away, Rep. Jessica Farrar, D-Houston, one of HB 1386’s joint authors, asked why it had not been brought back up when it was scheduled. The chair responded that the parliamentarian was still researching the point of order.

Finally, with less than 20 minutes left till midnight, HB 1386 came back up, the parliamentarian ruled the bill in order, and debate continued. Coleman rose to explain his bill and Farrar begin to ask him questions about how HB 1386 would work. With only minutes left till midnight shouts rang out though the chamber to just vote on the bill and get on to other business. A non-record “voice vote” was held and HB 1386 passed the first of its two required votes in the House.