Houston ISD School Board Candidate Peter Schwethelm has found the solution to ending school bullying... magicians. The outsider candidate - who has also suggested that getting Whole Foods to give away free vegetables is the solution to nutritious school lunches - is seeking to assure the queer community that he has a magician diligently working on a, yet un-articulated, program to end the torturous conditions that queer children endure.

Schwethelm just can't understand why Houston's GLBT Political Caucus won't support his candidacy and its, yet to be conceived, magician powered bullying solution. So Schwethelm has decided to camp out at the early voting location nearest the historic 'gayborhood' of Montrose and pass out literature attacking the Caucus. (high quality version available HERE) 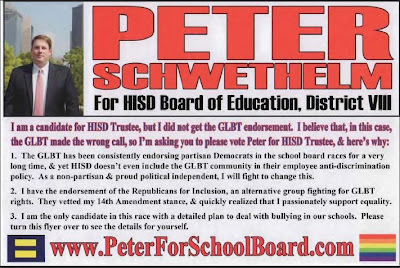 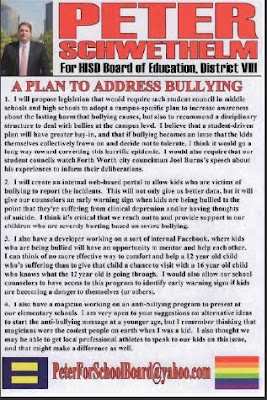 The criticism of the GLBT Caucus is a fair one, and one I've made myself. The Caucus is perceived by many to be little more than a tool for the Democratic Party. It invites all candidates to screen - but rarely - if ever - endorses non Democrats even in nonpartisan races like school board. One would think, however, that it might behoove Schwethelm to know the name of the organization he was criticizing before sending his flier of to the printers. (I suppose it's possible that "The GLBT" refers to some other organization - perhaps one the magician told him about).

Just for a second though look past the 'creative' syntax - the criticisms of partisan politics followed by the touting of an endorsement from a partisan organization - the lack of understanding of what "legislation" is and that school board members do not introduce it - the confusion about the meaning of the phrase "detailed plan" - the vague ideas about youtube and reinventing facebook and magicians - look down at the lower left hand corner of the flier.

See that? That's the logo for the Human Rights Campaign - correction: that's the TRADEMARKED logo for the Human Rights Campaign (the nation's largest lobby organization fighting for the rights of LGB (and when it suits them - T) people) which has neither endorsed, nor it seems ever heard of Schwethelm before this flier was distributed. Indeed HRC has issued a "cease and desist" order threatening legal action if Schwethelm continues to imply a connection between his campaign and HRC.

There are some good candidates running for School Board (Juliet Kathy Stipeche, who received the GLBT Political Caucus endorsement among them) and I am confident that the people of Houston are smart enough to elect a qualified, intelligent person to the position. Although with magicians involved, who knows?
Posted by Daniel Williams at Monday, October 25, 2010