There’s been a lot of media attention on the census lately, most of it focused on how the census helps determine funding levels for things like roads and schools. The census is also used as an excuse for the Texas legislature to redraw the borders of House and Senate districts every ten years, in the year after the census (Technically Texas can redraw its districts borders whenever it feels like it according to the Supreme Court in LULAC v. Perry).

The State Constitution requires that in drawing lines the legislature attempt to create districts that have about the same number of people in them. It also requires that districts include entire counties, unless the population of those counties is large enough that they have to contain multiple districts.

In addition the Voting Rights Act (signed into law by Texan Lyndon B. Johnson!) has provisions that require the district lines to be reviewed to insure that they are not drawn in ways that divide geographic areas with populations that are primarily made up of ethnic minorities. (Although the Supreme Court weakened this provision last year in Bartlett v. Strickland).

It has also been the practice of the legislature in drawing district borders to not split up cities, unless the city’s population is so large that it can’t be placed into only one district.

Unfortunately, no such rule or practice exists to keep the legislature from splitting up the “Gayborhood”.

This is Dallas’s historic GLBT neighborhood: Oaklawn, which is centered around the entertainment strip on Cedar Springs: 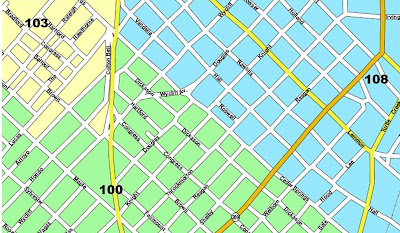 Cedar Springs is also the dividing line between House Districts 108 and 100 until the Toll Road, where a peninsula of District 103 intersects, dividing not only the population into three house districts, put placing important community organizations such as the John Thomas Community Center, The Cathedral of Hope and the Nelson-Tebido Health Center into three different districts. The average Friday night Oaklawn reveler will cross between these lines dozens of times a night without ever realizing it.

This is Houston’s historic GLBT neighborhood: Montrose, which is centered around the intersection of Montrose Blvd and Westheimer Rd. 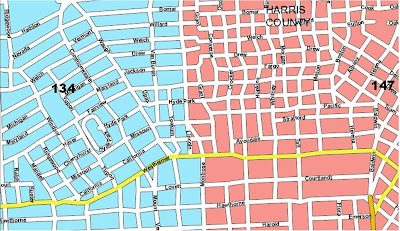 Again the border between House districts 134 and 147 perfectly bifurcates the neighborhood, placing neighbors and important community organizations in different districts.

If this was only happening once, I might think it was a coincidence, but when the two largest concentrations of GLBT people in the state are both carefully split down the middle it’s hard not to think that there has been an effort to dilute our political voice.

Houston is lucky; the two house members (Garnett Coleman and Ellen Cohen) who represent Montrose are allies of the community. Dallas is less lucky; of the three Oaklawn reps, one is an ally (Rafael Anchia) who will come through when it’s important but does not historically fight for GLBT rights; one has only been on the job for 6 weeks (Eric Johnson) and did not campaign on any queer issues; and one is a rabid homophobe (Dan Branch) who is fortunately being opposed by a gay man, Pete Shulte (more on this race soon).

Texas has only ever elected one out queer person to the legislature, Rep. Glenn Maxey. Currently there is no queer voice in elected office at the capitol. While allies are wonderful things to have, we cannot expect them to understand what it means to be GLBT in Texas, and they will never fight for us as hard as we would fight for ourselves.

Anyone who has seen the movie MILK knows that Harvey Milk ran for office almost continuously for a decade before being elected. It wasn’t until the city changed the way it elected city council members and drew the district lines so as to include the entire Castro neighborhood of San Francisco in one district that he was able to be elected.

So long as the legislature continues to draw House lines in a way that divides the community it will be difficult for us to elect OUR representatives to state government. What’s more it weakens our voice with our allies.

Unfortunately there is currently not a good solution to this problem. In 1974 there was an effort to get Sexual Orientation added to the Civil Rights Act, but that effort has been abandoned. We’re not covered by the Voting Rights Act and have no legal grounds to sue to stop the legislature from gerrymandering districts to split up our community.

The new boundaries will be drafted next spring by the House and Senate Redistricting Committees, who will be appointed by the Speaker of the House and the Lieutenant Governor. Our best hope of ending this disenfranchisement is to have a sympathetic person in charge of appointing those committees.

The current Speaker of the House is Joe Straus, a moderate Republican, but it seems like the former speaker, Tom Craddick, is trying to regain the position. Straus won’t care if queer people don’t have political power, Craddick will actively work to prevent it. The Speaker is elected by the House members and is generally a member of whatever political party has the most members in the House.

Currently the House is split with 77 Republicans and 73 Democrats, so if we have any hope of getting a sympathetic speaker the Democrats will need to hold all of their current seats and defeat 3 Republicans. The truth is that even if the Dems get a majority in the House we aren’t likely to get a speaker who cares about the disenfranchisement of queer people, because frankly it’s not a priority for the Democratic Party as a whole (see how the Dallas County Dems treated the Oaklawn neighborhood in today’s primary runoffs).

The Senate’s Committees are appointed by the Lieutenant Governor. The current Lieutenant Governor, David Dewhurst, is a first class homophobe. His Democratic opponent in this election is Linda Chavez-Thompson, a labor leader and longtime hispanic activist. I can’t claim to be incredibly familiar with Ms. Chavez-Thompson, but from what I’ve seen she seems to actually care about fairness and equality. It will be very difficult for her to beat Dewhurst, but she is our best hope of moving these district lines so that our community can vote together.

Otherwise, we’ll have to continue to try to change state government from across house lines.
Posted by Daniel Williams at Tuesday, April 13, 2010