Can Dallas Elect a Gay Man to the Texas House? Part I

The Dallas Voice broke the story last month that the Democratic nominee for Texas House District 108, Pete Shulte, is a gay man (Shulte is also one of the lawyers in the Dallas Gay Divorce Case). He will face incumbent Dan Branch in November.

If elected Shulte would be only the second out queer legislator in Texas history (the first being Glenn Maxey of Travis County who left the house almost a decade ago). I’ve written before about how the Texas House Districts are drawn to disenfranchise the queer community, splitting up the historic “gayborhoods” into multiple districts. District 108 contains about half of the historically queer Oaklawn neighborhood of Dallas, but has consistently elected Conservative Republicans since 1991. Given the history of the District Can Shulte win?

Shulte has maintained that this is a Democratic district, so I wanted to take a look at the 2008 elections and see how the District voted in State wide and national elections: 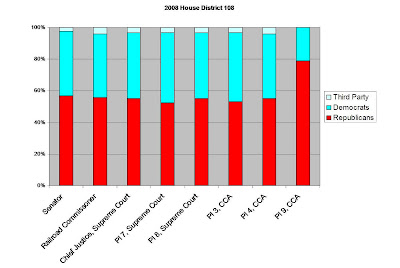 As you can see, every single statewide republican candidate won this district in 2008 (by an average of 17%). Even Barack Obama, who won Dallas County, lost house district 108. This in the strongest Democratic year in a decade. I think we can stop pretending that 108 is a Democratic district.

But is it winnable? A lot of that comes down to geography, let’s look at District 108.

View House District 108 in a larger map
The northwest corner of the District contains the “Park Cities” of Highland Park and University Park. These are two separately incorporating cities that are completely surrounded by the City of Dallas. They are also contain the most prestigious and costly addresses in the Dallas area. The Park Cities are solidly Republican.

The South Western quarter of the District contains about half of the historically Gay Oaklawn neighborhood, the yuppie haven of up-town and the increasingly hip downtown.

On the South Central side of the District we have Near East Dallas, a historically poor African-American neighborhood that is becoming increasingly gentrified.

The eastside includes the once hip “Deep Ellum” entertainment district, which still retains it’s primarily African-American roots, but which has an increasingly Spanish speaking population

The North East part of the district includes the hipster haven of Lower Greenville Avenue, which also has a large Spanish speaking population and the “M streets” a former hippie haven that is becoming a high rent desirable address.

Dan Branch has been able to hold this district largely on the voting power of the Park Cities, and the voter apathy of the low income and trendy parts of the district. Let’s map out the 2008 race and see how Democratic nominee Emil Reichstadt did against Branch (The map looks at the ratio of Branch voters to Reichstadt voters in each precinct)

The Dark Red section in the upper left corner is the park cities, Branch’s power base. The light pink stripe that cuts from the upper right to the lower left is the hip areas of ‘Lower Greenville’ and Uptown. Most of the blue areas, the areas that Reichstadt won, are low income. 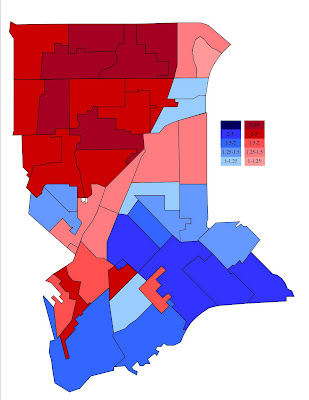 So what did Reichstadt do wrong?

He was virtually absent from social media like facebook and twitter, hipsters and yuppies don’t pay attention to yard signs and bumper stickers, if a politician doesn’t have a facebook page and an exhaustive interactive website, they don’t exist. In a race that the media didn’t pay attention to the hipsters and yuppies didn’t know who he was so they just didn’t vote in the House race.

He ran a “values” campaign in a change year. Reichstadt’s campaign focused on his support for the boy scouts and the importance of family. People who are disenfranchised (low income) or dissatisfied (hipsters) are not going to vote for mom and apple pie. There is a reason that “Change” and “Hope” were the buzzwords of the Obama campaign (Obama, by the way, won Lower Greenville and most of uptown).

He refused to run AGAINST Branch. Rather than go after his opponent's record of voting against the best interest of his constituents Reichstadt talked about fluffy ideas of patriotism and state pride, causing him to appear under informed and unqualified. The only way a Democrat is going to be able to win this district is by persuading people who don’t vote in House races to vote. One of the best ways to do that is to point out how they current representative is screwing them over.

He didn’t go bilingual. House District 108 has a large Spanish speaking population (It's 31.2% Hispanic), unfortunately few of them are registered to vote and even fewer of them are going to take the time to research candidates who don’t make a point of reaching out to them.

-------
So what lessons can Shulte learn from 2008? Is there anyway he can win a district that’s been held by republicans for almost 20 years?

Read Part II to find out.
Posted by Daniel Williams at Tuesday, April 27, 2010